Reverend Alex Turner was installed as Pastor of Belview Baptist Church in 1980 and for over 38 years, has served as Pastor with his wife, Co-Pastor Georgianna,  by his side.

As the shepherd of his flock, Pastor Turner prays to see the people of God grow in faith as they press toward the prize of the high calling as a body of baptized believers in Christ. Believing that heaven is a prepared place for a prepared people, the Turners minister and preach with passion and conviction. They have witnessed to many who have been saved, healed, delivered, and set free as numerous miracles have manifest in their midst. Pastor Turner is known for his outgoing personality, love of people and ability to counsel adults as well as teens. Pastor and Co-Pastor Turner are sought after speakers from North Carolina to Mississippi to New York. For more than 25 years, Co-Pastor Turner has headed a women’s retreat “The Elect Lady” which is held the first weekend in August. Women, from as far away as New York, come to North Carolina to be part of this powerful move of God.   God has really blessed as we have walked through His Word, not only on Sunday mornings, but also in Wednesday evening Bible Study, Sunday School and in new Converts’ Classes. We attend Bible Retreats, Bible Conferences and other times of refilling and refreshing. We gather on Sunday evenings now for service to keep us steadfast in the word. We reached out to others through our radio broadcast “Faith Outreach Ministry” and have secured land with further ministry on mind.

There have been two ministers who have gone out into the vineyard from Pastor Turner. They are Minister Josephine Trollinger, and  Apostle Kimberly A. Turner. Ministers currently serving are Evangelist Georgianna Turner and Minister Kenneth Perkins. Deacons ordained have been Herman Enoch, Jr., Bobby Gunn, and David Presley. This great man of faith and patience has a heart for God’s people. This love comes from a heart to do the will of God. He has endured and stands upon God’s promises that if a man will suffer with Him he will reign with Him.  Ever giving of himself and his resources, God has blessed him for his giving heart that reaches out to help. He has sown so abundantly and God’s word tells us that if a man sows sparingly, he will reap sparingly; but if he sows abundantly, he shall reap abundantly. We now go forward a God leads to do those things that He has ordained that this body of believers should accomplish. We know not to attempt God’s work in our might so we rely on the Holy Ghost and walk as He dictates. 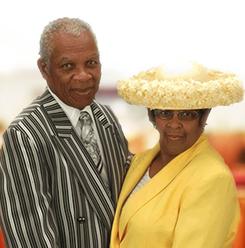